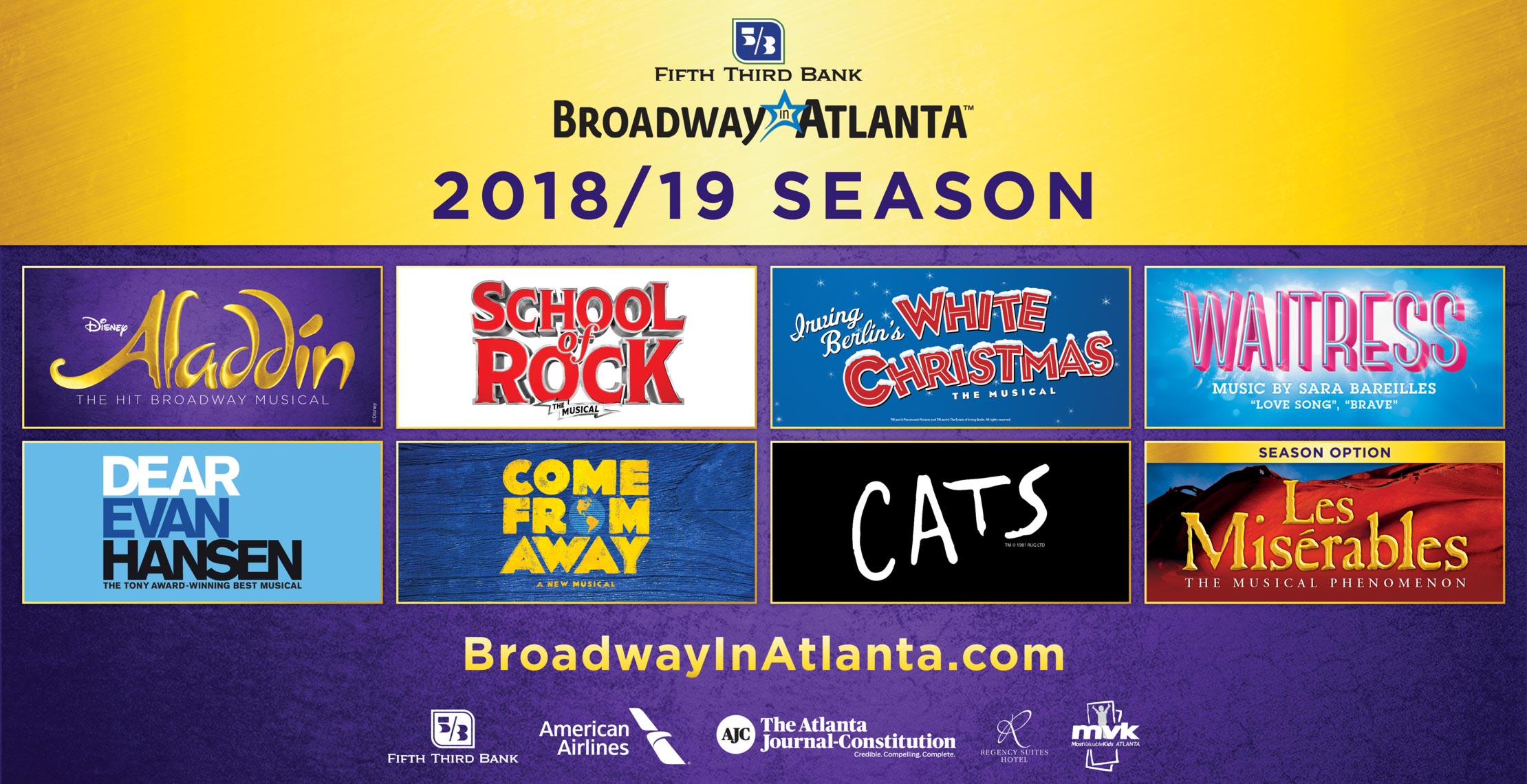 “As always, Atlanta audiences are in for a theatrical treat this season!” said Russ Belin, vice president of Broadway in Atlanta. “Many of these shows are Atlanta debuts – making the season lineup even more remarkable. Theatregoers will have unrivaled access to the unforgettable experience of top-notch Broadway shows right here at the Fox Theatre!”

Disney’s ALADDIN
September 12-23, 2018
Discover a whole new world at Disney’s ALADDIN, the hit Broadway musical. From the producer of The Lion King comes the timeless story of Aladdin, a thrilling new production filled with unforgettable beauty, magic, comedy and breathtaking spectacle. It’s an extraordinary theatrical event where one lamp and three wishes make the possibilities infinite. Hailed by USA Today as “Pure Genie-Us,” ALADDIN features all your favorite songs from the film as well as new music written by Tony® and Academy Award® winner Alan Menken (Newsies) with lyrics penned by the legendary Howard Ashman (Beauty and the Beast), Tony Award winner Tim Rice (The Lion King, Aida) and book writer Chad Beguelin (The Wedding Singer).

SCHOOL OF ROCK – The Musical
October 16-21, 2018
SCHOOL OF ROCK is a New York Times Critics’ Pick and “An inspiring jolt of energy, joy and mad skillz!” (Entertainment Weekly). Based on the hit film, this hilarious new musical follows Dewey Finn, a wannabe rock star posing as a substitute teacher who turns a class of straight-A students into a guitar-shredding, bass-slapping, mind-blowing rock band. These high-octane smash features 14 new songs from ANDREW LLOYD WEBBER, all the original songs from the movie and musical theater’s first-ever kids rock band playing their instruments live on stage. Vanity Fair raves, “Fists of all ages shall be pumping!”

WAITRESS
February 5-10, 2019
Brought to life by a groundbreaking all-female creative team, WAITRESS features original music and lyrics by six-time Grammy® nominee Sara Bareilles ("Brave," "Love Song"), a book by acclaimed screenwriter Jessie Nelson (I Am Sam), choreography by Lorin Latarro (Les Dangereuse Liasons, Waiting For Godot) and direction by Tony Award® winner Diane Paulus (Hair, Pippin, Finding Neverland). Inspired by Adrienne Shelly's beloved film, WAITRESS tells the story of Jenna – a waitress and expert pie maker, Jenna dreams of a way out of her small town and loveless marriage. A baking contest in a nearby county and the town’s new doctor may offer her a chance at a fresh start, while her fellow waitresses offer their own recipes for happiness. But Jenna must summon the strength and courage to rebuild her own life.

LES MISÉRABLES – Season Option
February 26 – March 3, 2019
Cameron Mackintosh presents the new production of Alain Boublil and Claude-Michel Schönberg’s Tony Award-winning musical phenomenon, LES MISÉRABLES, direct from an acclaimed two-and-a-half-year return to Broadway. With its glorious new staging and dazzlingly reimagined scenery inspired by the paintings of Victor Hugo, this breathtaking new production has left both audiences and critics awestruck, cheering “Les Miz is born again!” (NY1). Set against the backdrop of 19th-century France, LES MISÉRABLES tells an enthralling story of broken dreams and unrequited love, passion, sacrifice and redemption – a timeless testament to the survival of the human spirit. Featuring the thrilling score and beloved songs “I Dreamed A Dream,” “On My Own,” “Stars,” “Bring Him Home,” “One Day More” and many more, this epic and uplifting story has become one of the most celebrated musicals in theatrical history. Seen by more than 70 million people in 44 countries and in 22 languages around the globe, LES MISÉRABLES is still the world’s most popular musical, breaking box office records everywhere in its 32nd year.

DEAR EVAN HANSEN
April 23-28, 2019
WINNER OF SIX 2017 TONY AWARDS INCLUDING BEST MUSICAL AND 2018 GRAMMY WINNER!
A letter that was never meant to be seen, a lie that was never meant to be told, a life he never dreamed he could have. Evan Hansen is about the get the one thing he’s always wanted; a chance to finally fit in. Dear Evan Hansen is the deeply personal and profoundly contemporary musical about life and the way we live it.

“One of the most remarkable shows in musical theater history,” says The Washington Post. Rolling Stone calls Dear Evan Hansen, “a game-changer that hits you like a shot in the heart” and NBC News raves “An inspiring anthem resonating on Broadway and beyond.”

The Original Broadway Cast Recording of Dear Evan Hansen, produced by Atlantic Records, made an extraordinary debut on the Billboard 200 when released and entered the chart at number eight – the highest charting debut position for an original cast album since 1961. A special edition coffee table book authored by Levenson, Pasek and Paul, Dear Evan Hansen: through the window (Grand Central Publishing / Melcher) is now available, offering an in-depth, all-access look at the musical, including never-before-seen production photos and cast portraits, behind-the-scenes stories and a fully annotated script by the authors.

COME FROM AWAY
June 25-30, 2019
The true story of the small town that welcomed the world. Broadway’s COME FROM AWAY has won Best Musical all across North America! The New York Times Critics’ Pick takes you into the heart of the remarkable true story of 7,000 stranded passengers and the small town in Newfoundland that welcomed them. Cultures clashed, and nerves ran high, but uneasiness turned into trust, music soared into the night and gratitude grew into enduring friendships. Don’t miss this breathtaking new musical written by Tony® nominees Irene Sankoff and David Hein, and helmed by this year’s Tony-winning Best Director, Christopher Ashley. Newsweek cheers, “it takes you to a place you never want to leave!” On 9/11, the world stopped. On 9/12, their stories moved us all.

CATS
August 6-11, 2019
CATS, the record-breaking musical spectacular by Andrew Lloyd Webber that has captivated audiences in over 30 countries and 15 languages, is now on tour across North America. Audiences and critics alike are rediscovering this beloved musical with breathtaking music, including one of the most treasured songs in musical theater – "Memory.”

Winner of seven Tony Awards® including Best Musical, CATS tells the story of one magical night when an extraordinary tribe of cats gathers for its annual ball to rejoice and decide which cat will be reborn. The original score by Andrew Lloyd Webber (Phantom, School of Rock, Sunset Boulevard), original scenic and costume design by John Napier (Les Misérables), all-new lighting design by Natasha Katz (Aladdin), all-new sound design by Mick Potter, new choreography by Andy Blankenbuehler (Hamilton) based on the original choreography by Gillian Lynne (Phantom) and direction by Trevor Nunn (Les Misérables) make this production a new CATS for a new generation!

Experience CATS for the first time as it begins a new life for a new generation...or let it thrill you all over again!

The wait list for Fifth Third Bank Broadway in Atlanta’s 2018/2019 season is currently open. The renewal on sale begins on February 15 at 11 a.m. New subscriptions are expected to go on sale in mid-April with prices starting at $239 for all seven shows. Subscriber prices will vary depending on the show time, day of the week and seating location. Subscriber benefits include access to the best seats available, priority access to additional tickets and ticket exchange privileges. Visit BroadwayInAtlanta.com/Season for more information on signing up for the wait list.

Subscribers will also have the opportunity to purchase their same subscription seats for the Season Option LES MISÉRABLES, as part of their renewal before March 16, 2018.

For ease and convenience, Fifth Third Bank Broadway in Atlanta will first send renewal information via email and encourages patrons to subscribe online for the new programming lineup. This electronic communication will be followed up with an invoice sent via posted mail to all subscribers. Current subscribers who wish to guarantee their same seats must renew by March 16. Fifth Third Bank Broadway in Atlanta is also offering a three-installment payment plan for subscribers wishing to spread out their payments at no additional fee or interest.

Tickets to individual shows in the 2018/2019 lineup are not available for purchase at this time. Single-show tickets typically go on sale to the general public 8-12 weeks prior to opening night. However, subscribers will have the opportunity to purchase additional tickets before they go on sale to the public. For more information on the 2018/2019 lineup or to order online, please visit BroadwayInAtlanta.com. Group reservations for individual shows for parties of 10 or more can be made at this time by calling 404-881-2000. Applicable group minimum may vary depending on the show, but is typically 10 or more.

Performances are Tuesday through Thursday at 7:30 p.m., Friday at 8 p.m., Saturday at 2 p.m. and 8 p.m. and Sunday at 1 p.m. and 6:30 p.m. (all times are subject to change.) An American Sign Language-interpreted performance for the deaf and hearing-impaired is available for a pre-determined Sunday matinee of each engagement.

BROADWAY ACROSS AMERICA (BAA) is part of The John Gore Organization family of companies, which includes Broadway.com and The Broadway Channel.  Led by 11-time Tony-winning producer John Gore (Owner & CEO), BAA is the foremost presenter of first-class touring productions in North America, operating in 44 markets with over 400,000 subscribers. Current and past productions include Beautiful, Cats, Chicago, Dear Evan Hansen, Groundhog Day, Hairspray, Hello, Dolly!, Million Dollar Quartet, On Your Feet!, The Producers, School of Rock and Waitress. Broadway.com is the premier theater website for news, exclusive content and ticket sales. For more information please visit BroadwayAcrossAmerica.com and Broadway.com.